Frontlist | The best jobs for aspiring writers in India

Frontlist | The best jobs for aspiring writers in India
on Mar 17, 2021 BENGALURU: I once heard a quote from an extremely drunk gentleman – ‘Every Indian, deep within, nurses the ambition to write a book or make a movie’. Yours Truly is guilty of those two crimes, but they were not the first dreams I had. My earliest ambition was to become a train driver. I had uncles who worked in the Railways and I was enamoured by the perks and free tickets. Also, the prospect of having hundreds of people waiting for me to arrive at work seemed enjoyable. It was only when I watched the movie The Burning Train that I realised the risks involved in the job. Like most Indian boys, I briefly nursed the ambition of becoming a cricketer. But I was barely good enough to make my class team. When both Zaheer Khan and Yuvraj Singh made their debuts on the same day, I realised I was building dressing rooms in the air. When I finished the final book of the Harry Potter series, a spark reignited in me. I had been waiting for the book for months. When I finished it, I discussed it for weeks with friends in college and strangers in Orkut communities. 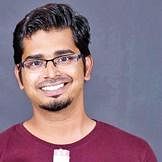 Life moved on, and I joined advertising – where I peddled lies for a living. Life found me a few years later as a journalist and research scholar – as I trudged through hypotheses created in desperation. Today, I’m involved in stand-up comedy, film criticism and journalism. But the writing flame has only grown stronger. Through one’s 20s, the main struggle is to arrive at the ‘big idea’. But in one’s 20s, the body is young and the mind is galloping like a wild horse on cocaine. By the end of my 20s, I knew what I wanted to write. But the 30s are different. The body has begun to age, like Sourav Ganguly in his final years on a cricket field. The mind is more stable, the wild horses have been tied up. And time - that unending resource of teenage and the 20s - has begun to get demonetised. For you see, time is of utmost essence to a writer. I often find myself looking at other professions and wondering if they are writers in secret. Security guards, for example, fascinate me. Obviously, one must avoid high-risk jobs, such as a jewellery shop or a bank. One needs to stand up a few times to salute the top boss, and the rest of the job is stationary. But then, it must be shattering to one’s ego – the only real earning a writer earns. Or how about a librarian, where one’s entire world is filled with books. Where the main work is to ensure people read in silence. To levy fines on people who are disrespectful to books and throw them condescending looks. But perhaps being surrounded by books would give me a complex! The best job to buy time as a writer, I realise, is of a standup comedian. Late night hours, and days completely free. There’s no inferiority complex, thanks to years of telling jokes in front of strangers every night. And the best part (and this works best if you are Muslim), you can tell a joke, and get thrown into jail. Your bail will not be granted for months at stretch, and you can happily finish your manuscript. After all, what’s common to Gandhi, Mandela, and Adolf Hitler – they all wrote their largest selling books in prison. In the words of Groucho Marx, ‘When you’re in jail, a good friend will be trying to bail you out. A best friend will be in the cell next to you saying, ‘Damn, that was fun!’. Source: India Expres Read more: https://www.frontlist.in/sppu-accepts-exceptional-rise-in-pass-percentage-in-oct-20/
Previous
Next
Author Authors Book book news Books Frontlist Frontlist Book Frontlist Book News Frontlist Books
1790

"A Bend in the Ganges" By Author Manohar Malgonkar: Book Review