'Sayed Haider Raza is a biographer's dream'
on Apr 06, 2021 Delhi-based art historian and curator Yashodhara Dalmia, author of pivotal books on Indian art, Amrita Sher-Gil: A Life, The Making of Modern Indian Art: The Progressives and Buddha to Krishna: Life and Times of George Keyt, recently launched Sayed Haider Raza: The Journey of an Iconic Artist. Interestingly, she has commissioned the book in 2016, after the modernist passed away. Dalmia, in a conversation with The Morning Standard, talks about the challenges of writing the book without the artist’s presence, while bringing to fore many lesser-known aspects of his life. Tell us about your experience writing Sayed Haider Raza: The Journey of an Iconic Artist. To me, Raza is an iconic figure. I met him in the ’90s when I was working on a book on the ‘Bombay Progressive Artists’. He used to come frequently to India from France, and we talked on those occasions. Raza was very articulate. Even in the later stages of his life, he had very accurate memories. He would remember even the smallest incident of his life. In a way, he was a record-keeper, a chronicler to be precise.
Raza passed away in 2016, and I was commissioned the book then. Many of his colleagues had also left the world, so getting the material on Raza’s life was difficult. But the artist was a great archiver. In a certain way, he is a biographer’s dream. He had kept his letters, notes, even his bills safely. All this compensated for his absence.
He knew not just about himself, his work, but also the whole group of artists who were around him, and who in the late ’40s had forged a front for modernism, the Bombay Progressive Artists’ Group that was formed in 1947. It had Maqbool Fida Husain, Francis Newton Souza, Raza, Krishnaji Howlaji Ara, Sadanand Bakre and Hari Ambadas Gade, these were the original members and more joined in later. Along with these aspects, he was still very suave and charming, that added to the attractiveness of the proposition. What were his prominent memories? According to you, how did he acquire the stature of a global artist? Raza’s memories were manifold. When he left for Paris, it was on a fellowship for two years, he hardly had anything. His passage, clothes, shoes, among other things were paid by his friends. He left for two years, but he stayed there for over half a century, this particular voyage was unforgettable. He was already a talented artist, but France made him. France gave him the skill, and the acumen. But he was also very Indian. He knew Hindi very well. He later acquired French but his heart belonged to India, as we see in the works such as Bindu, Ma, and Mandala, that emerged later. Raza belonged to India but picked up the skill and means of expression in Paris. 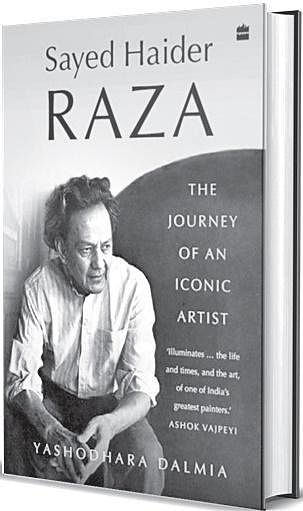 In the chapter titled Magical Flowers Were Humming, you have reproduced some letters Raza wrote to his wife Janine Mongillat, an artist herself. Could you talk about their relationship? It was a love story in the true sense of the word. He met her almost as soon as he reached Paris, when he joined the Ecole Nationale Superieure des Beaux-Arts. She was a fellow student, and they instantly took to each other. The remarkable thing about this relationship was they were very different from each other yet very similar. She was very down-to-earth in a French art society, and she was doing very contemporary works, whereas Raza was more philosophical and his works had to do with the domain of thought. They were, in many ways, together in their outlook towards the world, and their relationship was fulfilling. Read more: https://www.frontlist.in/two-trend-setting-books-set-to-clear-the-air-on-indian-data/ They kept their practices very separate from each other. As Raza used to describe, they had their studios side-by-side, and they used to meet in the evening. When they got married, her parents were not very happy with the match. She had an upper class upbringing of a typical French girl where everything has to be just right, and being the only child, her parents had high expectations of her. And Raza, not only was he an Indian, he was also an artist and his future was uncertain. But Janine had found her upbringing in sort of gilded cage and wanted something which was wholesome, something more to do with real life. When she saw Raza, although his clothes were tattered, she was impressed because he had a paintbrush in his hand. Janine was very sure that she wanted to marry Raza. And they did. After Raza got divorced from his first wife. It was an extraordinarily harmonious relationship. The many letters he wrote to her before marriage are full of passion and engulfed by her presence. When she died — her death preceded his by almost two decades — he was devastated. I don’t think he quite recovered from her loss. She was a real companion in every sense of the word. The book mentions his grandfather as a part of the cultural milieu of Delhi. Could you elaborate on that? Raza’s grandfather belonging to the well-known family of Delhi, was possibly associated with Bahadur Shah Zafar’s court. But he had to flee to Mandla during the Uprising of 1857. Raza’s coming back to the Capital in 2016 and activating the Raza Foundation to promote young artists and larger cultural ethos of the city, was in a way turning the wheel full circle. How did diverse religions impact Raza? Like his father, Syed Muhammad Razi, Raza was open to all religions. The artist was a Shia Muslim, but visited a church every day in France and thereafter proceeded to his to studio to work. Interestingly, he did various religious things, which Janine didn’t follow such as attending the  Sunday Mass. He often used to say that without a spiritual energy, no work of art could take place. Source: https://www.newindianexpress.com/
Previous
Next
Author Authors Book book news Books Frontlist Frontlist Book Frontlist Book News Sayed Haider Raza Yashodhara Dalmia
2042