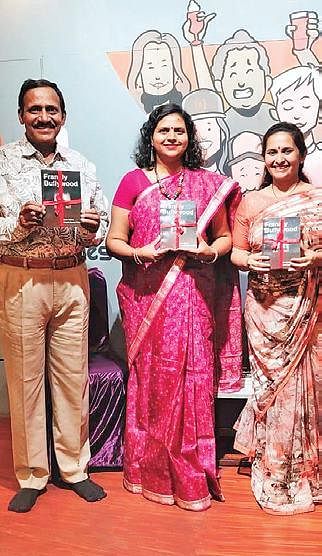 Experts discuss police administration at seminar A gathering of experts, including Justice (retired) Mridula Mishra, Vijay Prakash IAS (retired) and ADG (SCRB police) Dr Kamal Kishor Singh and others dwelt upon the subject of police administration at a recently held seminar. “Democracy is the most modern adaptation of state and the role of an enforcement agency has remained at the centre of discourse always,” said Dr Kamal Kishor Singh. He outlined the responsibilities of police under legal framework while Mridula Mishra and others touched upon the legal aspects of the subject. The Indian Institute of Public Administration in Patna organised the event in collaboration with the Chanakya National Law University.  RK Verma, secretary of the IIPA, coordinated the function, while president of IIPA Vijay Prakash threw light on the subject’s academic points. Read more: https://www.frontlist.in/cbse-news-this-is-what-cbse-board-has-done-for-students-to-fulfill-objectives/
Book exposing ‘dirty side’ of Bollywood released
A book titled ‘Frankly Bullywood’, co-authored by Richa Verma and Kirtesh Kumar Trivedi, was released by former 1983-batch IPS officer of DG-rank SK Bhardwaj along with other literary personalities in Patna. The book claims to expose the dirty side of Bollywood. Richa Verma said: “Behind the glitz, there are some dark and dirty secrets of the industry that have been exposed in the book”. Chief guest SK Bhardwaj, after releasing the book, lauded the authors for bringing such a thought-provoking book. He said that truth must come out through literature. Richa Verma is an educationist while Kirtesh K Trivedi is a businessman in the African nation of Botswana. First-time MLA wins gold at shooting event Jamui MLA Shreyasi Singh won gold medal in the women’s trap team event at the International Shooting Sport Federation (ISSF) World Cup held in New Delhi. She participated in the event as part of a three-member Indian team of the women’s trap. The members included Rajeshwari Kumari and Manisha Kher. The event was held at Karni Singh Shooting Range. The Indian team defeated Kazakhstan 6–0 in the final of women’s trap event played on March 28. Shreyasi Singh  is a first-time MLA and was part of the Indian team at the 2013 Trap Shooting World Cup held in Mexico. Source:  India News Express
Previous
Next
Author Authors Book Frontlist Frontlist Article Frontlist Education Frontlist India Frontlist India news Frontlist Latest Frontlist Latest news India News
2134

1,464 volumes, 74 years, and counting: the making of the world's biggest Encyclopaedic Sanskrit Dict....