Only NCERT textbooks for schools is not the right way forward

Only NCERT textbooks for schools is not the right way forward
on Oct 15, 2019 As a publisher of school textbooks and an owner of a private school, I often find myself in the unique position of observing educational publishing from both ends of the table. So, the latest government decision to make National Council of Educational Research and Training (NCERT) books mandatory for Central Board of Secondary Education (CBSE)-affiliated schools took me aback. There is no law that states that CBSE schools should only use NCERT books. Every five years, the government is supposed to release a National Curriculum Framework (NCF) that broadly highlights the aims, objectives and learning outcomes of the syllabus for students for the next five years. The last NCF released was in 2005. Why has the government not focused on this till date? And what about government schools? Nobody seems to be much concerned about them. Have enrolments in government schools increased? Can Class 4 students there read and write? Has the proxy attendance of the teachers stopped? Has any month passed by where we don’t hear children being admitted in hospitals because of the poor quality of midday meals provided? These are some of the questions that the government should look into instead of shifting attention of the public towards private schools and publishers and the textbooks that must be used for teaching. 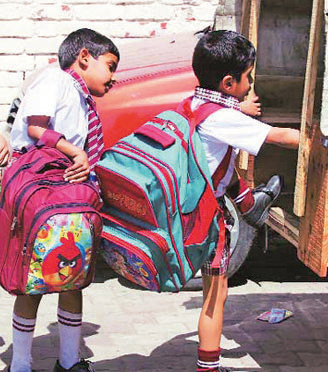 The NCERT has not been able to meet its existing demand in the market. Around 2,000 schools had placed orders with the NCERT, which, on its part, has not published all the books in the ‘mandatory list’ till date. As a result, the session has started but there are no books. Schools, booksellers, parents and, above all, children are suffering because of this. Iknow about a group of schools in south India specially ordering their books from a bookseller in Delhi simply because there is no bookseller who is able to meet their demands due to local scarcity. If there is a scarcity of NCERT textbooks even after when there are over 1,000 private publishers in India supplying books to private schools, how does the NCERT plan to supply books to all 18,000 schools? How does it plan to scale up operations? The NCERT provides no real explanation. In a recent meeting conducted by the CBSE, it was insisted that all school principals use NCERT books. When the issue of scarcity of textbooks was brought up, the response was that these books “are available online”. This presupposes that every student possesses — or has the provision of using — a computer for these online books to be downloaded on to. This doesn’t even address the question of what the student is to do in a computer-less classroom, never mind issues of maintenance. Do we expect our schoolchildren from Classes 1to 8 to carry a laptop or a tablet to school? Every parent is not capable of buying a laptop or tablet. And every school is not able to offer a computer, laptop or tablet to each student for free. So, clearly, this is not an idea for the masses and will not solve the problem of paucity of textbooks.0 Another way out is photocopying or printing out textbooks that are downloaded. In the market, a black-andwhite printout costs Rs1. So, an average ‘book’ of 150 pages will cost Rs150. This will not be bound and not be coloured. If you were to get colour printouts and have them bound, these books would end up costing you around Rs235. Now, if a private publisher is offering the same thing at an average cost of Rs200, is that really such a bad deal? One of the reasons why NCERT books are cheap is because of the subsidised paper that the government uses for printing them. This is not the case with private publishers. Paper prices in the last few months have shot up by at least 15%. Private publishers use a very high quality paper as compared to that used in NCERT textbooks. Paper constitutes a major part of costing. Unless it is subsidised by the government for use in textbooks, there is nothing that can be done to bring down the prices of textbooks. Let us also not forget that children studyfrom books published by private publishers to prepare for major entrance exams like the IIT-JEE (Indian Institute of Technology-Joint Entrance Examination). A student can never appear for such challenging examinations by studying from NCERT textbooks alone. My aim is not to prove parents or the government wrong about their agitation over book prices or policies, but to make people aware and appreciate the role of private publishers in providing education material. Making NCERT textbooks the only material available for schools is not the right way forward.
Previous
Next
Alternatives of NCERT textbooks Books for Children NCERT Books Issue NCERT textbooks for schools
499