Keeping Telugu literature alive
on Apr 01, 2021 In this digital age, when people are hardly reading books, many famous authors of yesteryears are today largely unknown, their works either under-read or out of print altogether. This is especially true of vernacular writers. A Telugu literature kit called, Telugu Sahitimoorthulu Mukachitraalu- Repati Tharam Kosam with biographies of 111 Telugu authors has been compiled by Shanmukha Sunnapuralla. Shanmukha, an MBA graduate, along with his parents, both Telugu teachers at a government school have been researching on the doyens of Telugu literature since 2011. 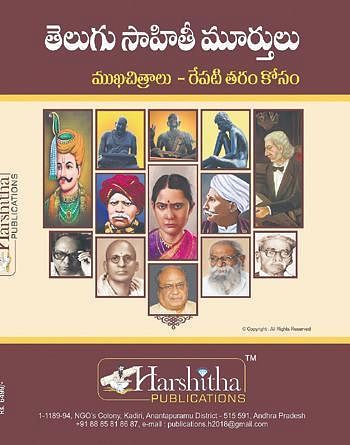 Some of the authors in this book date back to the 11th Century, according to Shanmukha. Some of the Telangana writers and poets included are Daasarathi Krishnamacharyulu, Kaloji Narayana Rao, C Narayana Reddy, Dasaradhi Rangacharya and Voddiraju Sodarulu. “First, we compiled our findings into a concise, yet distinctive volume one and soon we will be publishing the second volume. In all, we have researched on 512 local language authors,” says Shanmukha, who is the founder and publisher of Harshitha Publications. Inspired by his parents, who have over the years been trying to document Telugu writers, Shanmukha also wishes to rediscover and document the lives of the forgotten Telugu literary legends that shaped Telugu literature since the earliest ages. Shanmukha and his parents travelled all over the two Telugu states, and documented biographies with descriptive observations, and countless photographs. With this compilat ion, Shanmukha wishes to “inspire, empower and educate linguists, artists and literary progeny of tomorrow.” He questions: “How do we bring together generations of Telugu language and literature enthusiasts to celebrate our literary legacies and make Telugu literary heritage accessible to everyone? How do we honour their works which spoke for entire generations of gifted writers thus shaping the boundless Telugu literary art over past centuries?” They have also printed a Telugu calendar honouring more than 200 Telugu writers and poets through their birth and death anniversaries to ensure their legacies are celebrated every year. He says, “Our aim is to increase the visibility and prominence of veteran Telugu literary giants in people’s minds.” Source: IndiaExpress
Previous
Next
Author Authors Bestseller Book book news Education News Frontlist Frontlist Article Frontlist Books
2351