The rightwing Missouri senator Josh Hawley has found a publisher for a book dropped by Simon & Schuster over his role in attempting to overturn the US election on the day of the Capitol riot – and Simon & Schuster will distribute it. 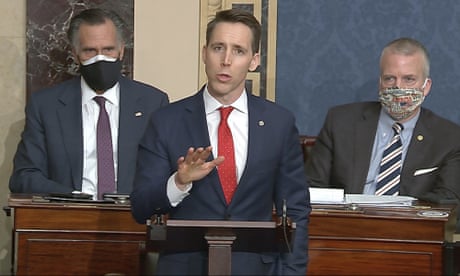 The Tyranny of Big Tech will now be published by Regnery, a conservative press, in a deal first reported by the Federalist, a rightwing outlet.

But under a distribution agreement announced in 2018, Simon & Schuster “handles distribution for Regnery titles in all markets and territories around the world” and “sales in Canada and export markets”.

The publisher dropped Hawley’s book a day after the attack on the Capitol by supporters of Donald Trump left five dead. More than 100 arrests have been made, amid reports some rioters planned to kidnap and even kill lawmakers. Trump was impeached for a second time over the riot, charged with inciting it.

Hawley was photographed raising a fist towards Trump supporters at the Capitol on the day of the riot. Later, with the Capitol in lockdown, he went through with his objections to electoral college results, in support of Trump’s claims the election was stolen, which have repeatedly been thrown out of court.

Hawley faces growing calls for censure, even expulsion, by Senate leadership. Some donors have suspended contributions. As reported by the Guardian on Monday, one major Hawley donor, the billionaire Jeffrey Yass, has said he feels “deceived”.

On dropping Hawley’s book, Simon & Schuster said: “We did not come to this decision lightly. As a publisher it will always be our mission to amplify a variety of voices and viewpoints: at the same time we take seriously our larger public responsibility as citizens, and cannot support Senator Hawley after his role in what became a dangerous threat to our democracy and freedom.”

Hawley responded angrily, saying: “This could not be more Orwellian … Let me be clear, this is not just a contract dispute. It’s a direct assault on the first amendment … I will fight this cancel culture with everything I have. We’ll see you in court.”

Simon & Schuster said it was “confident that we are acting fully within our contractual rights”.

On Monday, the Federalist report about Hawley’s new deal accused Simon & Schuster of “quickly caving to a pressure campaign organized by leftist activists and making the Missouri Republican one of the highest-profile victims of cancel culture”.

The report also channelled Republican defenses of Trump, referring to the insurrection at the Capitol as an “incursion” which it said was “the result of organized planning rather than impromptu incitement, as media and leftist activists had initially claimed”.

Numerous rioters have been recorded, inside the Capitol and since the attack, saying they were following Trump’s instructions.

“We are listening to Trump – your boss,” one told a police officer in remarks reported by the New Yorker.