‘Up to January salary has gone to the bank.’
“The arrears of August have also been sent.”
‘I have not received many such messages…?’
‘How to check?’
“All the staff in the college were happy.”

These are some WhatsApp messages that were roaming among the teachers of twelve colleges of Delhi University at 8:30 pm on 12 March 2021. The happiness hidden in these messages was like the happiness created by the showers of the first rain that came after a long drought. About five-six months later, the Delhi government released the salaries of the Teaching and Non-Teaching staff of twelve colleges of Delhi University. For the last five months, the teacher was teaching without salary and the non-teaching staff was working without salary. After all, what was the compulsion of the government due to which the government had stopped transferring funds to colleges for the last several months? Is there anything else that was behind the salary of the staff of twelve colleges?

In 1991, twelve new colleges were established in Delhi, following this agreement. One of them is Dr. BR Ambedkar College. Dr. Sujit says that the entire system kept running smoothly for the last several decades, but suddenly it started messing up in the last few years.

In the February 2020 assembly elections, the Aam Aadmi Party formed its government in Delhi with a second consecutive majority. Till now, the dispute between the government of the Aam Aadmi Party and the university administration regarding the governing body had come to the fore. In the budget of its second term, the Delhi government passed a bill that not only the Delhi government will stop the funds of these twelve colleges but in the coming days by amending the University Act, separating these twelve colleges from the University of Delhi and merging them with Dr. Bhimrao University will go.

That is, on the one hand, Delhi University was stubborn on the governing body and on the other, the Delhi government was adamant that it would not provide the funds of these colleges until the government was allowed to form a governing body. In these two fights, the employees of these twelve colleges got trapped. Due to the deduction of funds, his salary became irregular. Sometimes salary comes for one month, then it does not come for two months. Sometimes, the salary would be only for 10-12 days in a month. There came a time when the salary was completely closed.

Interestingly, it affected different classes in different ways. Among them there were people whose wages are good. Or there is some saving money in the banks. Or the salary of another member of the household is coming regularly, such people had less difficulties in the initial days. But for those whose salary is low or both Mian and Biwi work in these twelve colleges, it became difficult for them to run a house. There is a similar story of Dr. Vedpal and Dr. Rekha. Both are adhoc. Vedpal says that even though the salary had become irregular, the expenses were regular. From the needs of the daily household to the EMI, the fees of the child were regular and it was becoming difficult to bear this expense day by day. Dr. Vedpal, a resident of Mawana, also has to send money to his house. His bank now had just a few thousand rupees. In the coming days, he used to get tense thinking about how he would take out his expenses. The condition of senior professors was also deteriorating due to non-payment of salary for three to four months. Dr. Sujit also says that if he does not get salary, next month he would have to borrow from his friends for the EMI of the house, etc.

Due to this crisis created by the quarrel between the Delhi government and the university administration, the anger of these colleges employees was natural. Interestingly, the Delhi government has found a very unique way of dealing with this fury. Funds of twelve colleges were cut, but sometimes some three-four colleges were made available a fund of a few months, then some other colleges were made available some funds. For example, the government had done medicine that Agrasen College was given regular funds till January 2021. Dr. Vedpal says that there is no truth in this claim of the government, because from June to August last year, salary was given from the Students Welfare Fund. In such a situation, how can the government say that it sent funds regularly to Agrasen College? Similarly, after a few months salary was sent to different colleges, some months were stopped. College employees often do not know how long they have not received their salary or how long they have received their salary. This was an unprecedented situation in itself. For example, BR Ambedkar College got the fund till October 2020.

Teachers believe that even though it may seem a bit strange to see, it was actually a master-stroke of the Delhi government. This was actually a policy of divide and rule. Due to this ambiguity about salary, the employees of these twelve colleges could never be united.

The Delhi government has recently issued a directive for these twelve colleges, in which these colleges have been ‘advised’ to spend their own expenses. The government says that whatever the ‘deficit’ will be, the government will fill that gap. The teachers believe that with the help of this new formula, the government is dragging its hands with the help given to the colleges. In such a situation, the college will have to increase its fees many times in order to meet its expenses and in the coming days, the way of children of ordinary households to study in these colleges will be closed forever.

With this, the Delhi government made a new formula according to which colleges are now told that they should use the Student Welfare Fund to pay salaries to the employees. Dr. Sujit explains that this formula proposed by the Delhi government to colleges is illegal in itself because section 47 of the rules related to the Executive Council clearly states that the use of the Student Welfare Fund will be spent only on the students. It cannot be used as a salary of employees in any case.

While the salary of the people was stopped due to the withholding of funds by the Delhi government, they faced financial difficulties, while it became difficult for the colleges to discharge the expenses of their needs. From the AMC of the college commuter / software, electricity / waterboard bills started to remain outstanding. In many colleges, the condition became so bad that electricity-water connections were also cut there. This was an unprecedented situation in itself. Never before had such a situation occurred. College people say that the colleges were closed due to Corona, or if the college were open, not only those working there but the students would have had to face the dreaded situation.

Due to non-payment of salary, the worst impact was on the employees working in class IV and they reached the brink of starvation. Sunil Kumar is one of them. He says that for the past several months, the salary received irregularly broke his back. He was already withdrawing his expenses in some way due to inflation, due to this irregular salary, he somehow managed to meet his household expenses by borrowing from friends. The condition was so bad that after the opening of the college, even the fare of the bus to and from the city was not able to be collected. 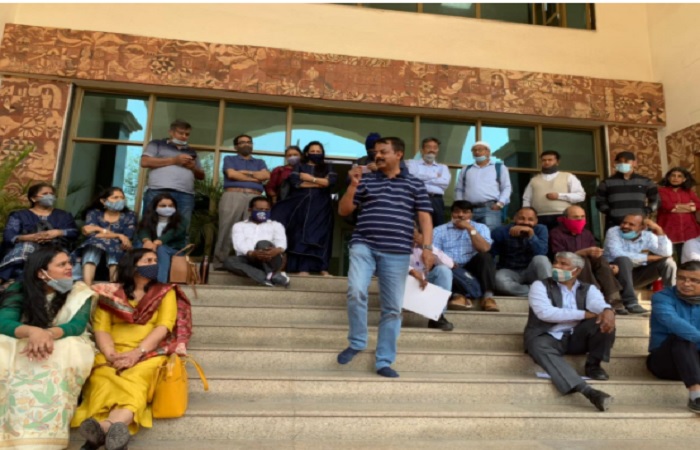 However, to deal with the entire situation, the teachers and staff of these twelve colleges are looking for a permanent solution. They unitedly decided to fight and the University of Delhi fell in favor of the teachers and staff of these twelve colleges of Delhi. Duta announced the shutdown from 11 March and the arrears of salary started coming from the 12th. This series of shutdowns in DU but continues. On March 15, there will be a march from the Vice Chancellor’s residence to the residence of CM Arvind Kejriwal at Civil Lines. The teachers and staff demand that the Delhi government should pay all the dues immediately and ensure that the salary will come regularly as before. At the same time, there is a demand that the Delhi government will send these twelve colleges. The acquisition plan by Ambedkar University should be scrapped with immediate effect.

That is, if farmers are stuck on the outskirts of Delhi, then inside the city, teachers will be seen on the streets. The apprehensions of teachers and staff have not been removed by the release of funds as soon as the pressure comes. Many are still waiting for the arrears of salary. But the point is how to find a permanent solution to this problem. The Kejriwal government, which is claiming to bring big changes in the education sector, is begging the rights of teachers and employees. Teacher leaders are saying that the struggle has become urgent. Anyway, the conditions on which the government has given the grant are dangerous.