The Karnataka Budget for 2021-22 is being presented in the State legislature today.

This is the BJP government’s second full-fledged Budget in this term. The Budget is presented amidst severe financial difficulties faced by the State owing to COVID-19.

Continuing the push for renewable energy – a sector Karnataka has been seen as a leader in – Mr. Yediyurappa announced the establishment of a 500 MW capacity Inter State Transmission System (ISTS) solar power park at a cost of ₹350 crore in Firozabad of Kalaburagi district.

In addition, the budget has announced measures to tackle issues related to the quality of power supply in the State.

Bengaluruu has been accorded ₹7,795 crore funds for comprehensive development in the State Budget 2021-22.

While presenting the Budget here on Monday, Chief Minister B.S. Yediyurappa stressed on his government’s commitment to provide better health and education facilities to people in the city.

Reducing traffic congestion in Bengaluru, fast-tracking the implementation of the suburban rail project, doubling between Yeshwantpura-Channasandra and Byappanahalli-Hosur divisions, construction of foot over bridges and implementation of “One Nation, One Card’ and automatic ticketing system – all these find mention in the State Budget 2021-22.

The COVID-19 pandemic has cast a long shadow on the state’s financial situation. While the Gross State Domestic Product (GSDP) for 2020-21 is estimated to contract by 2.6% compared to the previous year, chief minister B. S. Yediyurappa termed the preparation of the 2021-22 state budget “unprecedentedly difficult” and presented a revenue deficit budget, for the first time in recent times, in Karnataka assembly on Monday.

Karnataka state budgets have always been revenue surplus in recent years. The revenue deficit for 2021-22 is estimated to be ₹15,134 crore.

Mr. Yediyurappa said ₹5,372 crores has been spent during the COVID-19 pandemic in the State.

He said that more than 63 lakh people had benefited from initiatives while over 9 crore RT-PCR tests had been conducted.

Nearly 250 Primary health centres will be upgraded and converted into model PHCs.

Four Regional Food Safety labs will be set up at a cost of ₹2 crorer.

An Antimicrobial Resistance unit at a cost of ₹1 crore, regional cancer centres on lines of Kidwai, Jayadeva institute”s

Determined to reduce MMR to 70 from the current 92 and IMR to 10 from 23 in the State, the government will initiate all measures.

To detect metabolic diseases in children, two labs in Ballari and Bengaluru will be set up at a cost of ₹10 crores.

Establishment of ‘Mothers’ Breast Milk Bank’ in four divisions of the State at a total expenditure of ₹2.5 crore.

To start Chiguru’ programme at an expenditure of ₹10 crore to promote scanning of pregnant women.

Action to upgrade the Ayurvedic College in Shivamogga district as Ayush University.

programme based on Indian system of medicine at an expenditure of Rs.5 crore to protect the mother and the child from malnutrition.

Commencement of regional cancer treatment centres in Shivamogga and Mysuru at an expenditure of ₹100 crore.

Commencement of three new well equipped mobile laboratories to detect cancer in women at an expenditure of ₹11 crore.

Action to commence 50 bed capacity sub-centre of Jayadeva Insitute of Cardiology in Davangere at an expenditure of ₹20 crore.

Among the highlights are upgradation of all anganwadis in cities into creches in a phased manner to help working women. The budget promises loan of up to 2 crores for women entrepreneurs running hospitals or wellness centres. It also assures financial  help to rural women self help groups.

The budget also promised to implement concessional bus passes for women, a programme announced earlier but not implemented.

Congress members staged a walkout claiming the Government had no “moral right” to present the budget. 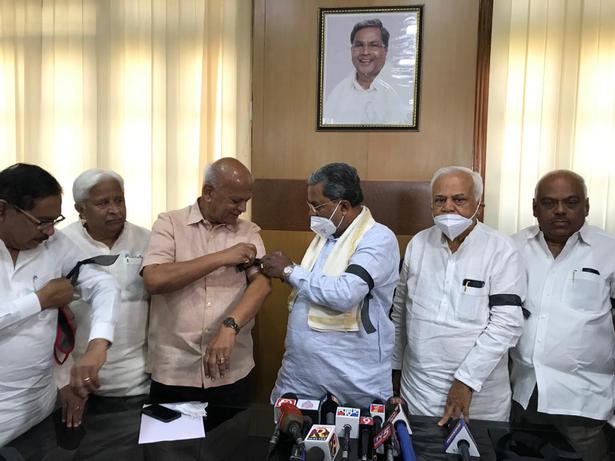