Frontlist Book | The Covid novels are arriving. And they'll be a warning to future generations

Frontlist Book | The Covid novels are arriving. And they'll be a warning to future generations
on Aug 10, 2020

We remember the horrors of the first world war but not the 1918 Spanish flu, which was mostly ignored by the literature

he first coronavirus novel from a major British writer has just been published. Summer, the last book in Scottish writer Ali Smith’s seasonal quartet, is infused with the pandemic we are living through. That it has appeared now is a tribute to the agility of both author and publisher, whose goal was to produce literature in as close to real time as possible. Does it herald a coming wave of pandemic fiction?

The world has changed since the 1918 pandemic: writers are less squeamish about the politics of the body

Granted, many people picking up a novel this summer might hope to escape into a fictional world where germs don’t steal all the headlines. But escapists are spoilt for choice. Literary fiction that explores contagion is thin on the ground, especially when compared with literature about that other grim reaper – war. Some believe this is the reason pandemics are less well remembered than military conflicts. Writers fail to fix them in our collective memory, so we are surprised – and unprepared – when a new one comes along.

Four giants of American literature famously neglected the 1918 flu pandemic, which killed 50 million people, and which struck just as they were establishing themselves as writers. Ernest Hemingway, F Scott Fitzgerald, John Dos Passos and William Carlos Williams were all affected by that pandemic, yet none drew it into their fiction (though they did discuss it in letters and diaries). It has been argued that they didn’t have the necessary distance on it, that it was for later writers to take up the theme; but this doesn’t wash. The first world war (death toll approximately 17 million) looms large in their stories, and they didn’t have any distance on that either.

But it’s possible these writers weren’t representative. Little research has been done on the 1918 pandemic in literature penned in non-English languages, and in the continents that bore the brunt of the disaster – Asia and Africa – the novel wasn’t then the pillar of cultural expression that it was in Europe or the US. We know almost nothing, for example, about how oral storytellers across Africa dealt with the subject.

It can also be argued that the 1918 flu did find its way into Anglophone literature, just not explicitly. It’s there, perhaps, in a certain anxiety, a pessimism and melancholy that infuse the literature of the 1920s – in TS Eliot’s The Waste Land (1922), for example, parts of which he wrote in London at the height of the pandemic.

Researchers are already working on how the 1918 pandemic was covered by Anglophone newspapers, to try to understand such things as when people first realised they were confronting a global phenomenon, what priority they accorded the pandemic relative to other world events, and how the name “Spanish” flu took root. The techniques haven’t yet been applied to literary fiction, but they will be. And then, says Oleg Sobchuk, who ponders these issues at the Max Planck Institute for the Science of Human History in Germany, it will become possible to test the hypothesis that the subject “decayed” more slowly in fiction than it did in the news – to test Ezra Pound’s notion that “literature is news that stays news”.

It may turn out that literary treatment of the 1918 flu is in fact just gathering steam, a century on. A number of novels taking it as their theme have appeared in the last few years. One of them, Moonstone by the Icelandic writer Sjón, recounts the pandemic in Reykjavik as seen through the eyes of Máni, a 16-year-old boy who is passionate about cinema and has sex with men for money. Sjón tells me that fiction writers have always been more interested in the politics of war than in the politics of the body, perhaps because they were too close to the latter. What helped Sjón write his novel was that his protagonist was already an outcast from his body and from society. This gave him the distance he needed to recount events.

Maybe for the same reason, science fiction and fantasy writers have never shied away from contagion. Building on a tradition of fable, which allowed them to step back from reality, they “peer right into the heart of the plague-ridden body of society”, Sjón says. One way they do so is by personifying the enemy. Think of zombies, who elicit the same kind of fear that a possible asymptomatic carrier of Covid-19 does today. In Phoenix Point, a video game that, with spooky timing, came out last December, a deadly virus becomes an evil alien mind bent on destroying civilisation. Sci-fi writer Allen Stroud, who chairs the British Science Fiction Association and co-wrote the game’s plot, says that this literary device forces the mess of illness into a nice clean fight between good and evil, and makes a happy ending possible.

A happy ending is harder to come by in a real pandemic, and verisimilitude is important to writers of literary fiction. That may be why so many are keeping plague diaries right now. Take the Portuguese novelist Gonçalo Tavares, whose diary Daniel Hahn has been translating into English; Eric Chevillard’s recent column “Sine die” in Le Monde, which has also been translated; and Marina Benjamin’s pop-up blog Garden Among Fires, which hosted more than 40 writers from around the world in the three months that it ran. 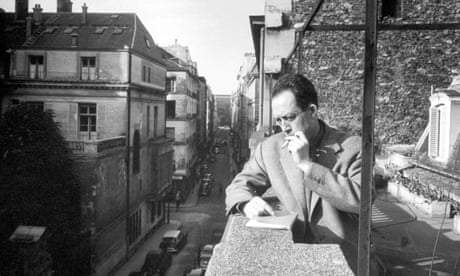 A diary is not a novel, but it might be the seed of one – as it was for Daniel Defoe’s fictional A Journal of the Plague Year (1722). Perhaps only some of these seeds will germinate. In a debate on BBC Radio 4’s Today programme in late March, the former children’s laureate Michael Morpurgo said he had no intention of fictionalising the current plague, while the novelist Louise Doughty felt sure the “great coronavirus novel” was in the works, and that Covid-19 was already infecting fiction subliminally.

It’s too early to know if we’ll reap a crop of pandemic-themed novels in years to come. The arrival of Summer suggests we might. The world has changed since the 1918 pandemic: writers are less squeamish about the politics of the body. Those novels that have staying power, in Pound’s sense, will act as messages in a bottle to future generations about what it was like to live through this. That’s important, even if we ourselves prefer not to be reminded. Luckily, for us there is still the option of escapism.