Apple's third-generation AirPods may have a lot in common with the AirPods Pro.

Apple may be ready to release a new pair of AirPods in March. New leaks suggest the third-generation of Apple’s regular AirPods will share some features with the $249 AirPods Pro, like spatial audio support. They may also have a shorter stem, interchangeable tips and a smaller charging case than the AirPods Pro. Here’s everything you need to know about the upcoming AirPods 3.

So far we’ve had two generations of regular AirPods, the wireless earbuds with the long stem that sticks down from your ear. But a new leak from 52audio claims to show the third-generation earbuds with a shorter stem, so overall the design looks more similar to the AirPods Pro.

An earlier report from Bloomberg also said that the AirPods 3 may share a similar design to the AirPods Pro, adding that the entry-level AirPods would miss out on active noise cancelation. So far, it’s unclear whether the AirPods 3 would have transparency mode, a way to pipe in external sounds to make you more aware of your surroundings. 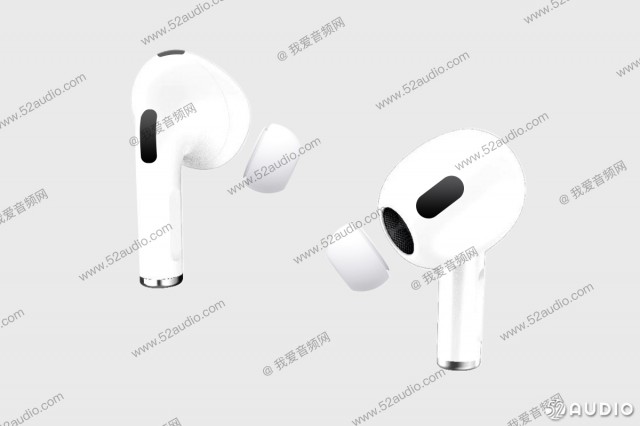 That’s the rumor. First introduced with the release of iOS 14 on the AirPods Pro and later the AirPods Max headphones, spatial audio uses accelerometers and gyroscopes to give a virtual surround sound effect when watching supported movies and TV shows on an iPhone or iPad.

The 52audio report suggests battery life would stay the same as the current second-generation AirPods, lasting around 5 hours in total. The case would hold additional charge, just like it does now. In the leaked images, the case looks like it splits the difference between the more square AirPods and rectangular AirPods Pro cases.

As for the sound quality there’s no clear detail yet on what to expect, although it’s likely that there would be improvements in fidelity over the regular AirPods. TF International Securities research analyst Ming-Chi Kuo, who has a strong track record in Apple rumors over the years, released a note in July 2020 claiming that the AirPods 3 would feature a similar system-in-package to the AirPods Pro, which means it’s likely audio quality would be comparable.

It’s also safe to assume that other AirPods and AirPods Pro features like quick switching will also come to AirPods 3.

Frontlist | Announcing the winners of the #BrunchBookChallenge 2020