Explained: What’s unique about leak of 533 million Facebook accounts, how are Indian users affected, should you worry?

Explained: What’s unique about leak of 533 million Facebook accounts, how are Indian users affected, should you worry?
on Apr 12, 2021 Earlier this year, it emerged that personal information of over 533 million Facebook users from 106 countries had been leaked online. In January, Alon Gal, CTO of cyber intelligence firm Hudson Rock, first reported that a Telegram bot was being used to sell phone numbers for free. The bot was using a vulnerability in a Facebook feature which allowed phone numbers linked to every account to be accessed for free. This is not the first time that a data leak from Facebook has been reported — there have been numerous such instances in the past, with the most controversial among them in recent memory being the Cambridge Analytica scandal in 2018 when it was reported that a political consulting and strategic communications firm had collected personal information of around 87 million people through a personality quiz app that many had accessed through Facebook. So, why is this data breach making news? What is unique about it and what are the potential implications? We explain. What is the nature of the data that was compromised and how was it leaked? The leaked data comprises personal information such as names, Facebook ID, addresses, phone numbers, email addresses, names of workplaces, date of birth, date of account creation, relationship status and bio. The data set did not include any financial information or passwords. The data was obtained through scraping whereby all the information was extracted by exploiting a vulnerability in Facebook’s contact importer feature. Mike Clark, Product Management Director at Facebook, has stated in a blog post that the data was not stolen by hacking into its system but by scraping its platform. As the blog post states, scraping is a common tactic that often relies on automated software to lift public information from the internet. While scraping itself may not always be illegal, the manner in which the information was obtained in this case and later made available online was a violation of Facebook’s terms of service.
Also Read | 8 Budding Self-Published Authors We Recommend Reading
In 2019, the Forbes reported that Facebook had confirmed that a newly discovered security vulnerability in Instagram’s contact imports feature let an attacker access names, phone numbers, Instagram handles and account ID numbers. Facebook had said back then that it was “already aware of the issue due to an internal finding”. The current data leak is being connected to that vulnerability, with Facebook admitting that the data dates back to two years ago. Also, it had publicly acknowledged the breach back then. Cyber researcher Dave Walker, who had first drawn attention on social media to the fact that the leaked data set also contained the personal information and phone number of Facebook CEO Mark Zuckerberg, told indianexpress.com, “It’s hard to be too forgiving towards Facebook because this issue was brought to their notice in 2017, which is two years before the data leak, when a 21-year-old Belgian security researcher demonstrated live on air to a radio station in Brussels how he could exploit a vulnerability in a Facebook feature to access the phone number of a senior politician. Facebook didn’t agree with his findings then, and said there was no tangible security failure or privacy impact.  Two years later, a user took half a billion people’s data.” What is unique about this data breach? Just the sheer number of Facebook accounts which were compromised and the amount of data which made its way online makes it one of the biggest-ever breaches of this kind. The exposed data includes personal information of over 533 million Facebook users from 106 countries, out of which there are 32 million records on users in the US and 11.5 million on users in the UK and 6 million on users in India. As many users on Reddit forums have pointed out, if the number of people affected by this breach were a country, it would be the third most populous in the world, behind China and India. Walker said, “The size and completeness of the data and the general availability of it being shared makes the present breach different from the ones in the past. We have a database of over half a billion users, which is around 20% of all Facebook users.” Several interesting pointers emerged when indianexpress.com examined the leaked data set comprising accounts of over 61 lakh Indians. While analysing the data, we found that among the metros, Delhi was the worst hit, with accounts of more than 1,55,000 being compromised. The leaked data also contained account details of over 1,36,000 people from Mumbai, over 96,000 from Kolkata, more than 39,000 from Chennai, over 48,000 from Hyderabad and around 50,000 from Bangalore. Among those in India who had been hit by the data breach, there were more than 49 lakh men and over 12.5 lakh women. 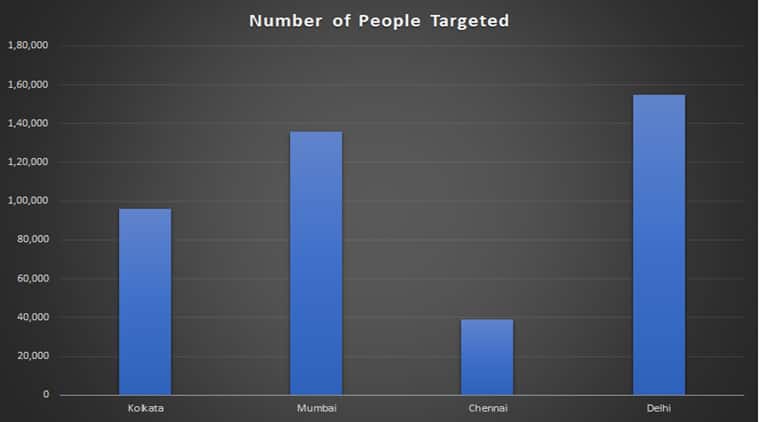 A graphical representation of the number of people from the four metro cities of India who were targetted. Troy Hunt, a security expert who runs HaveIBeenPwned, an online service for users to check if their information has been involved in a data breach, told indianexpress.com what makes the data set unique is the huge number of phone numbers that have been leaked. “Whenever there are data leaks of this nature, there are usually more email addresses. But in this case, a lot of phone numbers mapped to the Facebook account of users have been leaked. So, what you have now is like a giant global phone book which is available out there on the public domain,” he said. Where did the leaked data first become available? The massive database containing the personal information of over 500 million Facebook users was first posted on the dark web — a haven for illegal activities and stolen information ranging from the sale of data to hacking tools to drugs and weaponry—for free, enabling cybercriminals from all over the world to exploit the data to target Internet users worldwide. 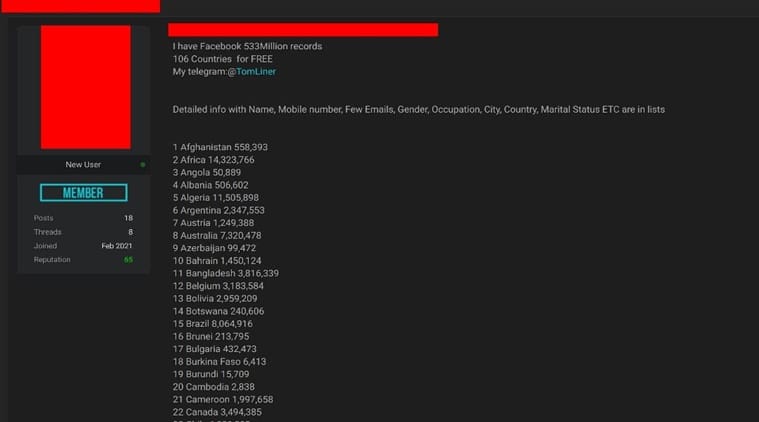