#BigStory: In the grim aftermath of the pandemic, will film scripts be tweaked to be more sensitive

#BigStory: In the grim aftermath of the pandemic, will film scripts be tweaked to be more sensitive
on May 03, 2021 Tough times call for tough measures. For more than a year now, people all over the world have traded normalcy for safety, staying confined within their homes to check the spread of the rogue virus that has claimed more than three million lives around the world. However, when life returns to normal, and we all hope it will be sooner than later, one presumes that the audience wouldn’t want a reminder of these endless days of living in fear and worry. When they step out of their houses, without masks, to go to a theatre to watch a film, they might want to watch fare that takes their minds off the situation they have just overcome. In the aftermath of the 9/11 terror attacks in the US, a lot of upcoming films and TV shows had, of their own volition, removed all references of the Twin Towers that would serve as a bitter reminder of the fateful day when several families lost their near and dear ones. A pivotal scene in ‘Spider-Man’ that had a web slung between the two towers, was chopped off even after it had made it to the first trailer of the film. The climax sequence of ‘Men In Black II’ swapped out the World Trade Center towers with the Statue of Liberty. The makers of the film ‘Spy Game’ had no towers to worry about but went as far as dialing back the amount of black smoke used in a scene lest it evokes memories of the thick plumes enveloping the towers after the planes crashed into them. With India in the throes of the second wave of the pandemic, uncertainty, and anxiety clouds everyone’s minds. This makes one wonder if the current situation will lead to changes in the way we tell stories. Will we tweak scripts to make more sensitive cinema or will heavier scripts, with grim backdrops, be kept on the backburner in favour of more lighthearted fare for some time? In this week’s #BigStory, we spoke to writers, producers, and directors to find out what they think will happen. Here’s what they had to say: Amrit Gangar (Film historian): It is not only the production of movies but also how they are used to silence the majority of people in a capitalistic society that also needs to be studied Film historian Amrit Gangar says it is not the nature of the content, but how it is shown that matters. “If you consider the Great Depression of the 1930s as a devastating pandemic, when the majority of American masses was writhing in grim misery, which was man-made, Walter Gifford, Head of President Hoover's Organization On Unemployment Relief in the USA, pleaded with the President that movie tickets be distributed free to the poor. But there were others, their spokesman being Henry Warner of Warner Brothers in Hollywood, who insisted that films were as necessary as any other commodities and should be ranked behind food and clothing. He pleaded that there was no need to distribute free tickets, because people somehow always had the money for the price of a ticket and added that they would go hungry or stay diseased or ill-clothed but would go to the movies,” relays Amrit, pointing out how, during the first outbreak, government channel Doordarshan had started broadcasting ‘Ramayana’ and ‘Mahabharata’ again. “It is not only the production of movies but also how they are used to silence the majority of people in a capitalistic society that also needs to be studied,” he asserts. A serving of escapism, please 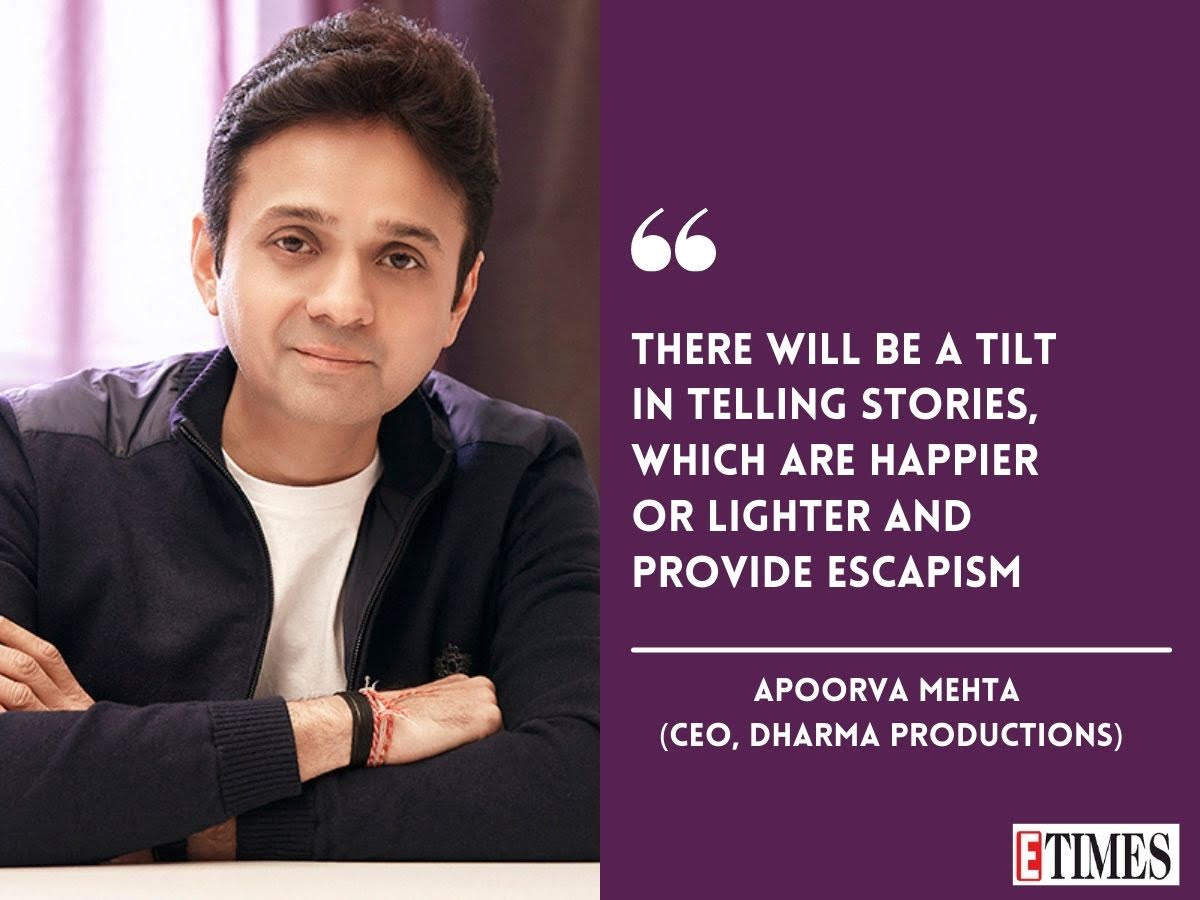 Apoorva Mehta (CEO, Dharma Productions): Such stories will have the power to bring back audiences to the theatres faster “The ongoing pandemic has affected every individual in some way. Global measures like lockdowns, curfews, and social distancing have had an impact on content consumption as well as creation, which, going ahead, may widen the divide between theatrical viewing and OTT first content,” agrees Dharma Productions’ CEO, Apoorva Mehta. However, he attributes the change to new shooting norms. “Given the constraints of shooting in large numbers or safety issues with global pandemic waves, there will be a tilt in telling stories, which are happier or lighter and provide escapism, in this currently, extremely chaotic world. Such stories will have the power to bring back audiences to the theatres faster, as the world slowly emerges from the pandemic,” he avers, adding that OTT platforms, by the sheer ability to provide a wide range of content across various genres, will continue to expand their offerings across various genres. “This will very quickly fill in the gap for specific content, which may take a while to make its way back to the theatres,” he predicts. Alex Billington (Writer): Most people would rather watch something else, go to another time and place, or experience joy and happiness and laughter Film writer Alex Billington feels the pandemic is similar to 9/11 and what happened in its aftermath. According to him, while Hollywood makers displayed sensitivity after the attacks, years later, they started making more films about 9/11. “I think we will see more pandemic films with more time. There are already a handful of documentaries about health care workers during the early days of the pandemic. It is important and powerful filmmaking but I don't know anyone who really wants to watch these films right now. I do think writers and directors will definitely rethink their material, both to reflect society and the world now that it is going through a new pandemic, but also to make new films that tell entirely different stories,” he opines. 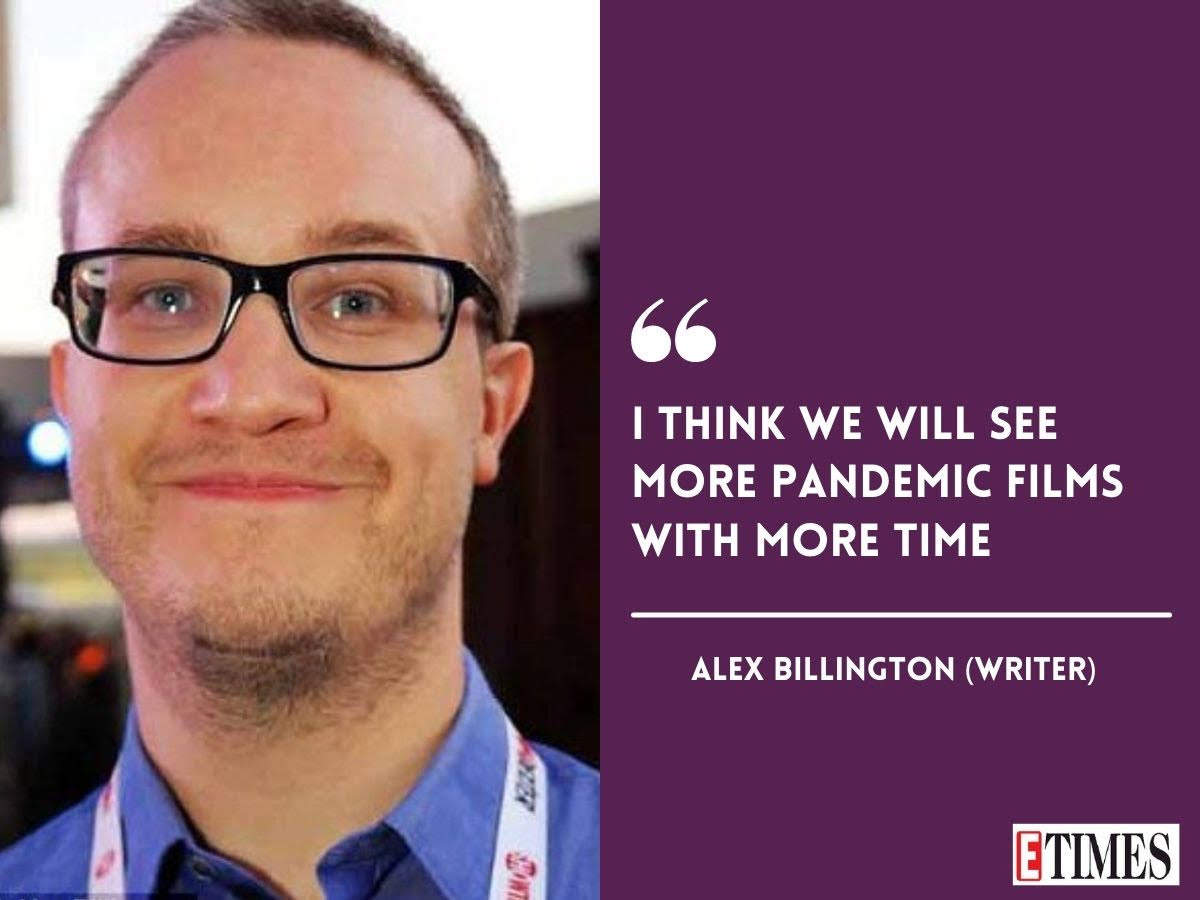 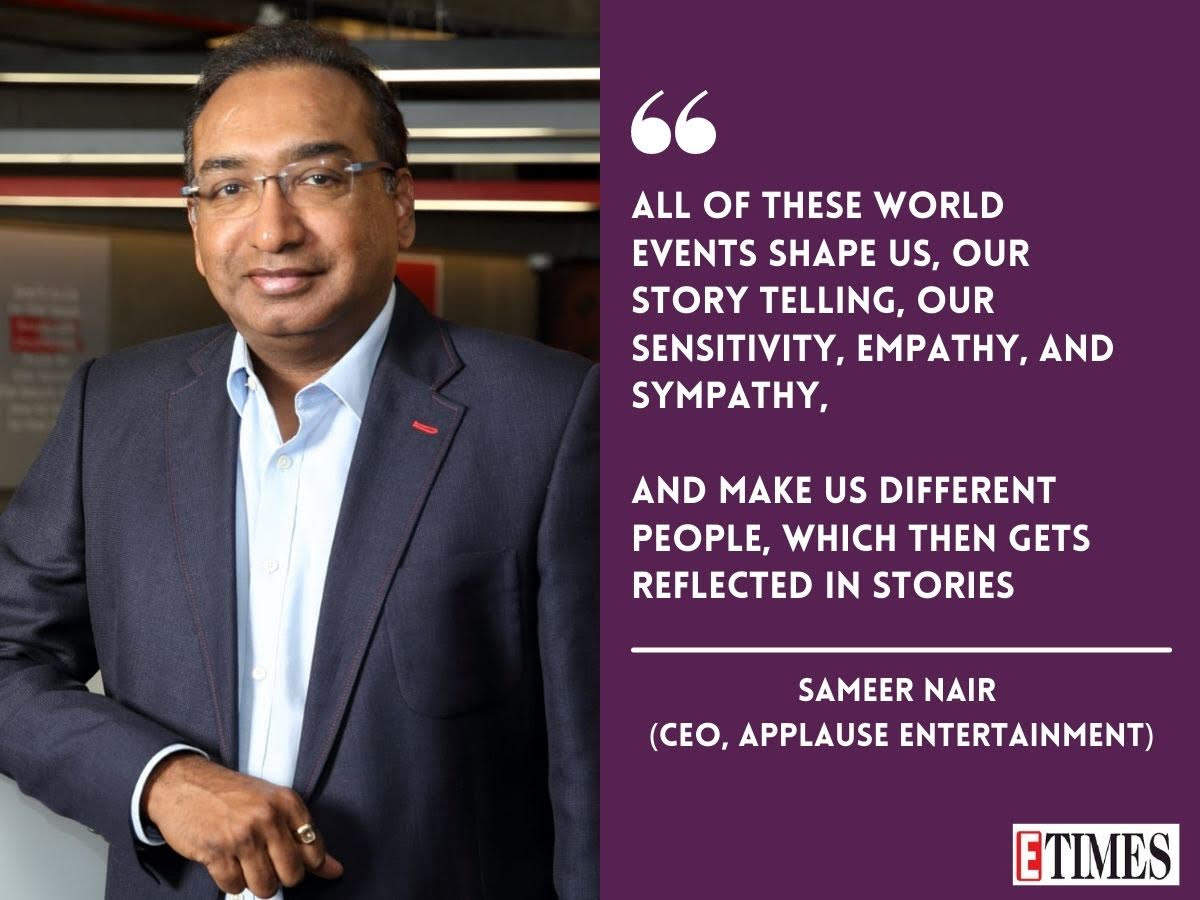 While it is not a solution, Sameer feels the only thing to do right now is to continue to create content and tell stories. “All of these world events that happen, shape us, our storytelling, our sensitivity, empathy, and sympathy, and make us different people, which then gets reflected in the stories as we go forward there is no knee-jerk reaction. When telling stories to the audience, you cannot really let some event, or something happening right now, define the story that needs to be told. All of these experiences, the grief, and trauma around us are shaping creative people and storytellers. All of it will show up in due course into our mainstream; I don’t know if it will happen in the immediate aftermath”. Reign of reality Deepak Kingrani (Writer): Real-life heroes like doctors, nurses, and other frontline workers will be shown as the protagonists Right at the outset, writer Deepak Kingrani announces that creativity comes at a cost. “Every word in the script costs you money. The kind of financial losses the producers are facing with the films that are ready is very scary. The pandemic has restricted us in terms of crew, the uncertainty of the shoot, Covid protocols, etc. All of these factors force us to be very specific in terms of the story. Producers are looking for stories that have very few locations and characters but with the same amount of creativity. For writers, this is like flying without wings; it's very challenging to make intriguing stories with a limited number of locations and artists,” he shares. 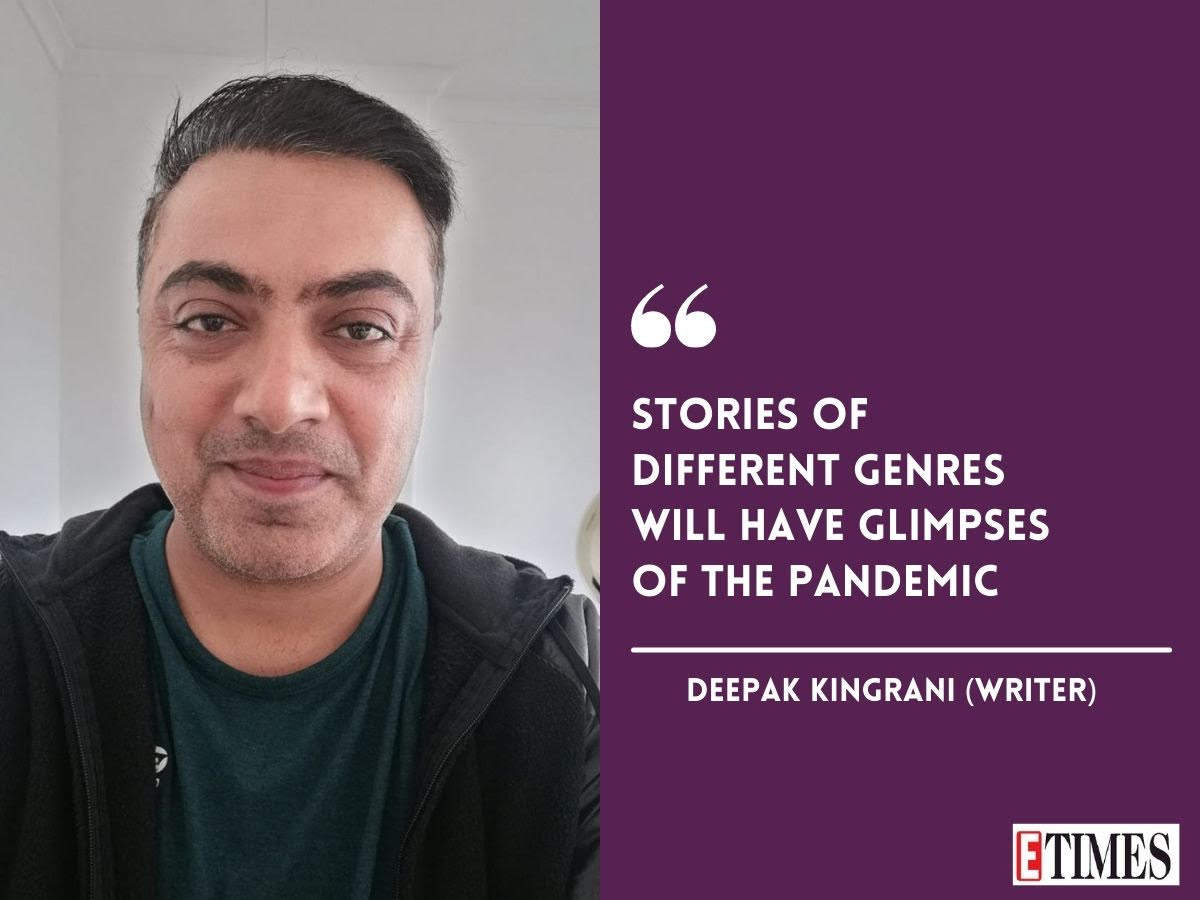 Ask him if there will be more pandemic-related films and he says, “I think stories of different genres will have glimpses of the pandemic. Real-life heroes like doctors, nurses, and other frontline workers will be shown as the protagonists. Subjects that were being considered may be dropped looking at the current scenario. It’s going to have an impact for a long time for sure. Producers who used to make multiple films, will not easily come on board for a film until promised a good return on investment, especially from digital platforms because theatres are victims of people’s fear”. Alankrita Shrivastava (screenwriter-filmmaker): I hope I can grow to become a more sensitive and empathetic storyteller While Alankrita Shrivastava says she isn't aware if people are shifting the focus of their stories, she offers her take on it too. Personally, I hope that this collective suffering of the citizens of India makes us all better human beings. And as a screenwriter and a film director, I hope there is deeper humanity in my work. I hope I can grow to become a more sensitive and empathetic storyteller, who can dig deeper into the human experience and tell stories that have meaning, she asserts Another catalyst of change Suparn Verma (Writer-director): The pandemic hasn’t really caused a change of briefs but the ‘Tandav’ controversy has The pandemic hasn’t really caused a change of briefs but the ‘Tandav’ controversy has. As the entire content ecosystem was sent a diktat, briefs have changed, reasons writer-director Suparn Verma, adding, We are making the shows we are; it is just that it is tougher for writers to sit and write because the mind space is very very grim and depressing, and everybody is facing personal tragedies. Life is tough right now and it is going to tough for a year, at least. Creatively, we have to think of options when a city like Mumbai goes under a lockdown and no shooting is allowed, but what if you have written a story that is Mumbai-centric. Constantly trying to adapt to a changing scenario--right down to an actor falling sick and technicians falling ill and losing people--it has not been simple. It has been pretty harsh in every way possible. Source: indiatimes
Previous
Next
9/11 Bollywood change Covid-19 film scripts Frontlist Frontlist India news Frontlist Latest Frontlist Latest news Frontlist Latest Update Frontlist News Hindi Films Pandemic
1480

Interview With Arpit Vageria, Author of "The Girl Next Door"