Andrew Cuomo discloses he could earn $5.1 million from book on pandemic leadership

Andrew Cuomo discloses he could earn $5.1 million from book on pandemic leadership
on May 18, 2021 New York Gov. Andrew Cuomo disclosed Monday that he was paid a $3.1 million advance to write his COVID-19 leadership book last year and under his publishing contract will make another $2 million on the memoir over the next two years. That total windfall of more than $5.1 million further inflamed critics who have said it was inappropriate for Cuomo to personally enrich himself with a self-congratulatory book, published just as the State was seeing a deadly resurgence in infections last October. At least 52,987 people have died of COVID-19 in New York, according to data compiled by Johns Hopkins University of Medicine. Cuomo, a Democrat, had for months declined to say how much money he made from writing American Crisis: Leadership Lessons From the COVID-19 Pandemic, published by Crown Publishing Group, a division of Penguin Random House. The book largely recounts the Governor's once-daily press conferences on the COVID-19 pandemic. 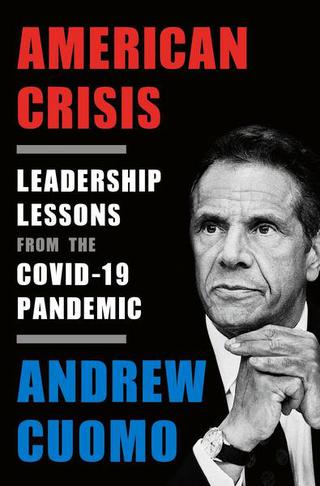 The disclosure of the big payday was made on the day Cuomo's mandatory financial disclosures were due to a state ethics agency. Cuomo also let reporters view a copy of his tax returns, which were also due on Monday. Cuomo spokesperson Richard Azzopardi said Monday that after taxes and expenses, Cuomo had netted $1.5 million on the book last year. He said Cuomo donated $500,000 of his profits from the book to the United Way of New York State and is putting the rest into a trust for his three daughters. Azzopardi didn't immediately provide a response on Monday to a question about what the governor plans to do with the future $2 million in book payments.

From the moment Cuomo's book came out, he was criticised for penning a book touting his performance while the crisis was ongoing. Since then he's come under more criticism over the involvement of some of his staff in preparing the book for publication. In April, the state's comptroller, Thomas DiNapoli, authorised New York Attorney General Letitia James to investigate the role some of Cuomo's aides played in “drafting, editing, sale and promotion” of the book. Azzopardi has repeatedly said that State employees who helped with the book did so on their own time in a “volunteer” capacity. The Democrat has also been criticised by some over his administration's decision to withhold data on COVID-19 deaths among nursing home patients for months as the book was being finalised and sold. Critics say the administration was purposely obscuring the true death toll to boost the governor's image and mute criticism that Cuomo hadn't done enough to protect nursing home residents. Cuomo often used the smaller death toll to argue that New York lost far fewer nursing home residents than other States, based on a percentage of overall deaths. The Governor and the State's health commissioner have said the numbers were withheld because the State had trouble verifying them. Sochie Nnaemeka, State director of the Working Families Party, a liberal group that has clashed often with Cuomo over policy, said the revelation about his book payday showed he was “unfit to lead.” “Last June, millions of New Yorkers were struggling to keep their families safe, and thousands of seniors were struggling to survive in the state’s nursing homes, while the governor was having his staffers write a book that would make him millions off of the still-raging public health crisis,” Nnaemeka said. The top Republican in the State senate, Sen. Rob Ortt, said “the fact that Governor Cuomo lined his own pockets with more than $5 million while thousands of New Yorkers were dying horrific deaths is a national disgrace.” Azzopardi sniped back at the critics. “The governor worked night and day to try to save lives and lead New York out of this crisis. Lord knows where they were,” he said. The book revelations come as Cuomo is also under fire over sexual harassment allegations made by several women who worked for him. One aide has also accused him of groping her breasts beneath her shirt. The State’s attorney general is investigating those allegations and the State Assembly's judiciary committee is probing whether there are grounds to impeach the Governor. The Assembly committee's investigation is also examining whether Cuomo provided members of his family with priority access to COVID-19 tests in spring 2020. The State’s ethics commission approved Cuomo’s request to write the book last summer, but only if he followed several conditions, including making sure it was written on his own time and not using State property, personnel or other resources for “activities associated with the book.” The Governor was also barred from advertising, promoting or endorsing his book when performing his State duties. John Kaehny, executive director of pro-transparency group Reinvent Albany, has called for Cuomo to release his full contract with the book publisher so the public knows whether Cuomo will receive additional compensation if more copies of his book are sold. Azzopardi said on Monday he'd ask Cuomo if he will release the contract. Source: https://www.thehindu.com/
Previous
Next
andrew cuomo andrew cuomo new book Author Authors Book book news Books Books news Frontlist Frontlist Book Frontlist Book News Frontlist Books Frontlist News us governor
1849