11 MUST-READ HIGH FANTASY NOVELS COMING OUT IN THE SECOND HALF OF 2020
on Jul 08, 2020 Speculative fiction comes in a lot of flavours: Science fiction, paranormal, urban fantasy, alternate history, historical fantasy—because imagination is endless, so is the list of sub-genres. But one sub-genre springs tends to spring to mind: high fantasy. What’s high fantasy? The term, coined by author Lloyd Alexander in a 1969 address to librarians (and later a 1971 essay) refers to fiction set in a secondary world—not the one we live in. High (or epic) fantasy is often focused on a hero of mysterious pedigree (who often has great talents hidden from everyone, even themselves) and centres on moral themes, mostly the battle between good and evil. It sounds so formulaic when it’s put like that, but then—think of all the great characters’ stories that hang on (and play with) that framework: Yeine! Kvothe! Both Dany and Jon Snow! If you’re into other realities, good news: a lot of high fantasy is coming out this year. Here are some of the titles slated for the back half of 2020.

Zen Cho’s newest novella starts with a bandit walking into a coffee house and ordering a drink. But of course the bandit doesn’t get to enjoy his beverage in peace. Someone has to start causing trouble. This novella about found family celebrates martial art movies with witty dialogue as a group of thieves band together to protect a sacred object—whether they want to or not.

THE EMPIRE OF GOLD BY S.A. CHAKRABORTY

Have you been reading the Daevabad trilogy? If not, the third installment in one of the most stunning trilogies I’ve read just arrived, so it’s a good time to get caught up. But here is the short version: djinns are real, and they have their own city—but they have strict laws about any djinn descendants who have human blood. If you’re shafit—part djinn, part human—you must stay in the Daevabad forever. That’s the world Nahri, a young woman living on the streets of Cairo, steps into at the start of the series when she learns she’s djinn royalty, but also shafit. At the end of the last book, she’s back in Cairo, and she’s at war with forces much bigger than herself. 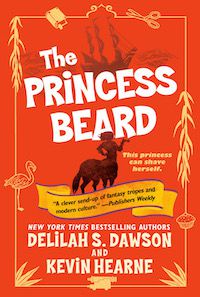 THE PRINCESS BEARD BY DELILAH S. DAWSON AND KEVIN HEARNE

Once upon a time a princess woke up from a long sleep in a magical castle, and…honestly, it wasn’t great. She was hairy and gross and she’d been asleep for a while. At least no creepy prince had come by. That was a relief. So the princess decided to take off on her own, trim her nails, keep her beard, and become a pirate, as one does. This epic fantasy is set in Dawson’s and Hearne’s world of Pell and features a pirate crew that would be at home in Terry Pratchett’s Discworld. 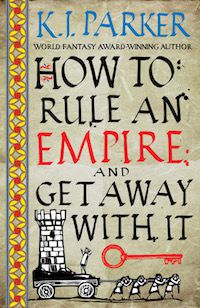 HOW TO RULE AN EMPIRE AND GET AWAY WITH IT BY K.J. PARKER (AUGUST 18)

Notker is an acclaimed playwright and a terrible liar, but he might be the hope of an empire. When his city is under siege, Notker is pressed into service to take on the role of a lifetime: ruler of the empire. It’s a role that will grant him fame, fortune and immortality, but it also might kill him. 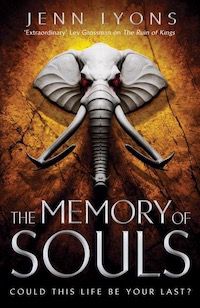 THE MEMORY OF SOULS BY JENN LYONS (AUGUST 25)

The Memory of Souls is the third book in Jenn Lyon’s Chorus of Dragons Series, the story of Kihrin, the bastard prince who discovers his destiny isn’t to save the kingdom, but to destroy it. In this third book, the city of Atrine lies in ruins and  the end of the world is closer than ever. Kihrin  and his friends must convince the king to try a ritual that will save the world, but Kihrin  must also come to grips with his possible destiny as the worlds’s destroyer. 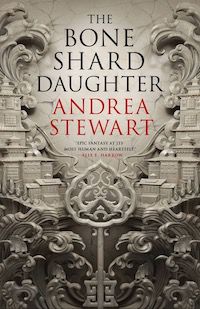 This is the first book in a new series that focuses on an empire controlled by bone shard magic. Lin is the daughter of an emperor who has reigned for decades, and his former heir. But she’s fallen out of favor. Her people are in danger as well; her father’s reign is failing and revolution is sweeping the country. She’s trapped in the palace and her father doesn’t recognize her claim to the throne. So she sets out to learn bone shard magic—something that’s forbidden—on her own.

Andrea Hairston’s book Master of Poisons weaves African folktales and postcolonial literature into a story about Djola, the righthand man and spymaster of the lord of the Arkhysian Empire who is trying to save his adopted homeland, and Awa, a young woman training to be a griot, who “tests the limits of her knowledge and comes into her own in a world of sorcery, floating cities, kindly beasts, and uncertain men.” 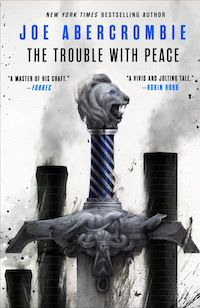 THE TROUBLE WITH PEACE BY JOE ABERCROMBIE (SEPTEMBER 15)

The second book in Abercrombie’s second consecutive trilogy set, The Trouble With Peace picks up during an unwanted peacetime in a set of countries that are kind of used to being at war. Investor Savine dan Glokta was through an ordeal in a city overtaken by labor protests, and that’s changed her and ruined her prospects and her reputation. Rikke, a seer with a power called the Long Eye, is trying to master that ability before it kills her. The two new lords of the North would rather be fighting a war than waging peace.  Meanwhile all the old leaders (and all the old characters you know from the first trilogy) are being removed but there’s likely a couple of familiar old faces and they’re controlling all the pieces on the board—as usual. If you like high fantasy that turns convention on its head, this is probably the series for you. It’s also going in a steampunk, industrial direction, which is an interesting evolution.

Little Red Riding Hood isn’t so little anymore. Her name is Rosa, and she’d like to retire and live a nice quiet life. So would  Hou Yi the Archer, who is just tired right now. But they’re not going to get that right now—deadly sunbird are threatening the countryside. These middle-aged women will now have to undertake a quest to protect all they love. (Honestly, speaking as a middle-aged woman, sign me up for ALL the fantasy about tired middle-aged women on quests.)

I can’t tell if I am cheating with this one or not because the news about Novik’s newest novel, which is all about a dangerous school of magic (!) and comes with its own interactive site (!!), is a little light on details. Is it set in its own world? I cannot tell. Is it high fantasy for real?  I’m not sure. But there’s sorcery, there’s a plucky, talented heroine, it’s the first book in a trilogy,  and it looks intriguing, so I’m including it here. 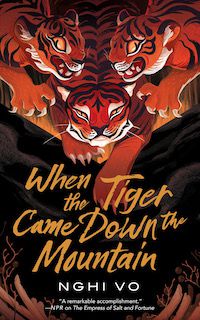 This book is a standalone followup to Nghi Vo’s The Empress of Salt and Fortune. In this book the cleric Chih finds themself and their companions at the mercy of a band of fierce tigers. To keep themselves uneaten until the  mammoths can save them, Chih tells a story: the tale of the tiger and her scholar lover—a woman of courage, intelligence, and beauty—and discovers how truth can survive becoming history.     Original Article: Book Riot
Previous
Next
12 must reads 2020 Books 2020 Upcoming books 2020 Upcoming fiction novels A CRY OF METAL &amp; BONE A DEADLY EDUCATION ANDREA HAIRSTON ANDREA STEWART BURNING ROSES BY K.J. PARKER DELILAH S. DAWSON AND KEVIN HEARNE Frontlist High Fantasy novels 2020 HOW TO RULE AN EMPIRE AND GET AWAY WITH JENN LYONS JOE ABERCROMBIE L. PENELOPE MASTER OF POISONS must reads of 2020 NAOMI NOVIK NGHI VO S.A. CHAKRABORTY S.L. HUANG THE BONE SHARD DAUGHTER THE EMPIRE OF GOLD THE MEMORY OF SOULS THE ORDER OF THE PURE MOON REFLECTED IN WATER THE PRINCESS BEARD THE TROUBLE WITH PEACE Top 11 reads ZEN CHO
1346